Largely a residential coastal town, Formby becomes a tourist hot spot during the summer months, with day trippers attracted to its beaches, sand dunes, and wildlife.

The land between Formby and the coast is varied in vegetation, wildlife and terrain. The area includes pine forests: natural and man-made, sand dunes, marram grass, deciduous woodland, seasonal ponds and lakes. Large areas of this land are protected by the National Trust.

Formby beach is the location of the first lifeboat station in the UK and the foundations of the last of the lifeboat station buildings remain on the beach. The last launch took place in 1916.

The beach is also the location of the famous prehistoric footprints, both human and animal. These appear and then disappear depending on the tides, the weather and season. 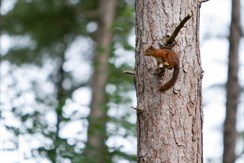 The whole of the coastline here is managed as a Special Area of Conservation (SAC) for its important wildlife reserves by Sefton Coast Partnership. The pine woods at Victoria Road have been established as a National Trust reserve for the red squirrel, listed on the endangered species list. Formby is one of several sites in Britain were the red squirrel can still be found. It is also famous for the presence of natterjack toads and is only one of a few sites in England where they will breed.

If you are visiting the National Trust site, check out their guide for enjoying the great outdoors and getting closer to nature.

Formby is also home to RAF Woodvale, a small RAF station on the outskirts of the town. The airport, opened in 1941 was home to the last ever operational service of the British legend, the Spitfire.

Formby is served by excellent cycle routes and walking routes, mainly centering around the pinewoods along the coast leading to both Southport and Liverpool. There are also many roads suitable for cycling, leading to the larger conurbations to the north and south.

Bus services in the town are provided by Arriva, Stagecoach and Merseytravel.