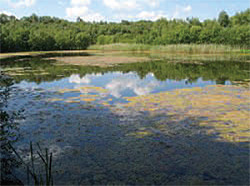 Mere Sands Wood is a wildlife-rich haven in the heart of agricultural west Lancashire. The reserve covers 42 hectares (105 acres) and is made up of lakes, mature broadleaved and conifer woodland, sandy, wet meadows and heaths. The management of the reserve is designed not only to encourage wildlife, but also to provide facilities for people to visit and enjoy seeing the wildlife. The site is nationally important for wildfowl and dragonflies, as well as its geology, and has a fascinating history. It stands on an area of layered sand and peat, which was deposited by the wind over boulder clay during the last Ice Age, and by periods of water logging following this period.

Perhaps the main wildlife interest at Mere Sands Wood is the over-wintering birds. Winter wildfowl populations include nationally important numbers of Gadwall and Teal, as well as Wigeon, Pintail, Shoveler, Pochard, Tufted Duck, Goldeneye and Goosander. Locally important species include Mandarin Duck and Kingfisher and there are annual sightings of Willow Tit and Lesser-spotted Woodpecker. Breeding species include Great Crested and Little Grebes, Shelduck, Gadwall, Pochard and Tufted Duck, alongside Little Ringed Plover and Lapwing. Birds that breed in the woodland include Sparrowhawk, Kingfisher, Great Spotted Woodpecker, Treecreeper, and Redpoll alongside the common tit and warbler species. Turtle Dove and Quail breed occasionally. In all, over 170 bird species have been seen on the reserve, of these 60 are known to have bred.

The nearest train station is at Rufford on the Ormskirk to Preston line. The Reserve is half a mile west of Rufford on the B5246, which runs between the A59 at Rufford and A565 at Mere Brow. Look out for the Meresands cattery and kennels sign!

Please check the website for the latest opening times and further information.