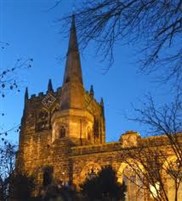 Overlooking the town is Ormskirk's Parish Church, the Church of Sts Peter and Paul, architecturally one of England's most unusual churches, as it is one of only three with both a tower and a spire.

Legend has it that the Church has both a tower and a steeple as two sisters couldn't agree which one to have built, so their father built both.   We are assured though that this isn't correct!

The steeple dates back to the 15th century, with the massive tower added on a century later. As well as fragments of Saxon and Celtic masonry in the east wall, the church features 12th century Norman work in the north side of the chancel, adding to the historical and architectural heritage within the beautiful building.

If you visit the church you can learn of its fascinating history by having a guided tour, the Church is open on Thursdays & Saturdays from 10:30am to 2:30pm during the summer months for prayer and meditation and to view.

Details of the walking and cycling routes from the railway station are shown on the map.