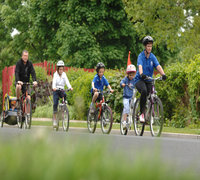 Many of the areas in Sefton and West Lancashire are included in themed cycle routes which are ideal for families and less experienced cyclists. There are now thirteen themed routes in our area for you to choose from ranging from three miles to ten miles. The routes have been carefully selected, are well sign posted and are mostly off road.

Burscough is a thriving community located by the Leeds to Liverpool canal and situated half way between Liverpool and Preston.  As well as being home to Martin Mere Wildfowl and Wetlands Centre, Burscough Wharf and much more, its a great place to cycle with some of the best places to eat and drink.

Moorhen.  The Moorhen cycle route is a circular route beginning at Burscough Wharf which then takes in sections of the historic Leeds and Liverpool canal and quiet country lanes.  The short route makes it ideal for families.

Lapwing.  The Lapwing cycle route takes you through a wildlife rich area

in the heart of agricultural West Lancashire.  Also starting at Burscough Wharf, the route goes north passing through or near several nature reserves.

Southport, is 20 miles north of Liverpool, it has beautiful beaches, unspoilt coast line, a superb choice of restaurants, world-class golf, beautiful parks and a family fun fair.  There are plenty of hotels, bed and breakfasts and a great nightlife.  There is also a cycle hire shop in Southport based in the Eco Centre, Esplanade, Southport so you don't need to bring your own bike.

Marram.  The Marram cycle route is a shorter route taking in seaside views of the Southport coast.  It passes the Queens Jubilee Nature Reserve and then heads south towards the sandhills of the Ainsdale and Birkdale Local Nature Reserve.

Shrimp.  The Shrimp cycle route takes in many of the main landmarks of Southport and can be followed in either direction.  It is a circular route which passes the home of the Southport Shrimpers, goes under the second largest pier in Britain and also around the resort's Marine Lake.

Swan.  The Swan route takes you along the picturesque boulevard of Lord Street, famous for its Victorian shop fronts and tranquil gardens.   The route continues past Hesketh Park, which is home to a number of attractions that include an observatory, several lakes and a cafe.

Natterjack.  The Natterjack route begins on the old Cheshire Lines Railway and then follows a circular route through Ainsdale, Birkdale and Southport Town centre.  It also passes the Birkdale Nature Reserve, where you can find the rare Natterjack Toad and Sand Lizard.

Kestrel.  The Kestrel route allows you to enjoy the varied urban landscapes and the newly developed community woodland where hunting kestrels can often be seen. The route also takes you near the RSPB bird reserve at Marshside.

Mallard.  The Mallard route takes you past the RSPB bird reserve at Marshside before leading you through Churchtown, a pretty village north of Southport.

Formby is well known for its beautiful beaches, dramatic sand dunes and coastal pinewoods. It is also home to the Red Squirrel Reserve. Formby Beach is ideal for families, with picnic areas and waymarked paths to the beach, dunes and woods. There are spectacular views across the Irish Sea and sometimes even the mountains of Cumbria can be seen. The area is also well served by a Formby and Freshfield train stations and bikes can be taken free of charge on Merseyrail trains.

Asparagus.  The Asparagus route passes through Formby Village and the National Trust Site along the picturesque coast.

Butterfly.  The Butterfly route goes along the north of Formby and passes through or near several Nature Reserves.  It also starts and ends at Freshfield railway station.

Crosby is home to the iconic spectacular Antony Gormley statues which consist of 100 cast iron figures spanning the length of the beach.  Its easily reached by train with Waterloo, Crosby and Blundellsands trains stations in the area.

Only 15 minutes along the coast from Southport, Crosby is also home to Crosby Lakeside Adventure Centre and is also the start of the 22 mile Sefton Coastal Path.

Curlew.  The Curlew route is the first themed leisure route in Crosby and begins at Crosby Lakeside Adventure Centre.  It is a circular route and takes in the sights of the Crosby Coast.  The route travels through Crosby Coastal Park with views of Wirral and North Wales coasts in addition to Antony Gormley's Another Place statues.

We also have a route which runs through the area of Maghull and Aintree travelling along the towpath of the Leeds and Liverpool canal. The route also travels along the Trans Pennine Trail and is mainly off road, making it ideal for familes.

The Owl route is a 10 mile circular route starting at Maghull station and passing through Maghull, Old Roan, Aintree and Melling.  The route can be started at any point and takes in large sections of the Leeds and Liverpool Canal.

If you would prefer to receive the flyers by post, please fill in our contact form. Or alternatively, they can be picked up at the Eco Centre, Esplanade, Southport, PR8 1RX.